Twitter Can Make Us Smarter; The Rise of the Amateur via Crowdsourcing 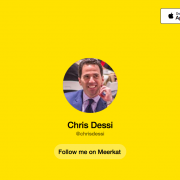 What Happens When Meerkat and Live Television Collide?

5 Killer Steps to Success in Social Media
The No. 1 Thing You Need to Do Right Now If You’re Unemployed