And oh yeah, my father Adrian Dessi threw out the first pitch.

Some days are better than others. Some days stick with you.  Some days, you can’t wrap your head around events and circumstances; the world seems to unfold magically. Saturday July 9th was one of those days. So I’m going to do my best to share with you exactly what happened.

On Friday we had loaded up two car loads of kids, and headed into the Bronx in the rain.  It was not a fun ride. There was a ton of traffic in the Bronx, and the game was eventually cancelled. But we collectively decided to make the most of it, so like any self respecting Italian New Yorkers, we all headed to Arthur Avenue in the Bronx for dinner.  We were all happy to be together.  As some of you already know, my father is suffering from ALS (Lou Gherig’s disease)….so collectively we tend to not sweat the small stuff.  We regrouped and mapped out the next day’s activities.

Here’s where things get fuzzy.  My brother Mark had told all of us that there was some sort of ALS event, and that Dad MAY be able to get on the field.  Cool. Nothing too crazy, but wow -cool.  Mark then informed us that the Yankees were paying for a Suite for us.  Wow – even cooler. We were excited too. Jeter could potentially crack his 3000th hit.  We were excited, but not over the moon – yet.

Saturday morning arrives, and we’re in the Bronx early.  Mark tells us all that since Dad is part of this big ALS Associationceremony,  we need to be there early.

This is around the time that the crazy/fun/amazing/super/giggle like a school girl things start to happen.

While we were pulling into the parking garage, New York Yankee announcer Michael Kay walks in front of our car, looks over at me and smiles, so I say “Good Morning Michael”…he returns with a big smile and “Good Morning!”  Funny.  Funnier is that my Mother had no idea who he was, so I pointed out a billboard with his face on it in the parking garage.

We all proceed to the executive suite lobby at the stadium.  While waiting in the lobby we saw: Mike Francesa, John Sterling, and John Flaherty wow.  At this point I’m out of my mind excited. What a great start to the day. The kids were all in a good mood, and we couldn’t wait to get to see our suite!

We were greeted in the lobby by Yankee executives who were amazing.  They were engaging, warm, and made us all (including all of the kids) feel very much at home. This is when they dropped the bomb:

They proceeded to tell my Father he was going to throw out the first pitch.  We were all floored. Just floored.

I still have no idea how my brother pulled this off, but it was about to happen.  So we get into the suite and check things out. The place was AMAZING.  We then meet up with Dorine Gordon the CEO of the ALS Association (Greater New York Chapter).  What an elegant, classy woman.

Now we’re ready to get down to the field.  We exit the elevator in the bowels of the stadium.  It’s not pretty, but it’s a huge tunnel that you could fit a car through.  We walked passed the club house, the news media room, and at this point I’m so jacked up that as I’m pushing my father’s wheel chair at Mock 3, so my brother keeps telling me to slow down, soak it in…I finally slow down and pick my head up to look around a little…when we see Joe Torre walking towards us.  My brother Mark says “Hey Joe, how are  you”…he replies “Hi there folks” waves, smiles…insane. We get out onto the field and we’re beaming. We can’t believe it.  My brother says to the executive “don’t try to stop me if I make a break for first base”…we all laugh…..we’re soaking it in, it’s emotional.  We know why we’re there. I start to make small talk with one of the Yankee executives “yeah, we grew up with guys like Ron Guidry, Don Mattingly, Willie Randolph, and (I hear my Brother say “Reggie Jackson“)…I turn, and good lord, there he is.  Reggie comes over, and take a knee next to my father.  He took a knee…He asked my Dad about his graduation ring, and where he was from.   Dad says “I’m from Brooklyn – used to be a Dodgers fan, but when they left I was ALL Yankees”…I’m in shock.  We’re amazed.  Reggie gets up and asks for a pen. He grabs a ball and signs it “7/9/11 To Adrian, Reggie Jackson “HOF 93′”- that’s Hall of Fame for all of you novices out there

Moments later I hear my brother say “oh my God”…I turn and see the captain, Derek Jeter come up to us.   He shook my father’s hand and called him “Sir”. He looked us all in the eye. I was utterly star struck. Not Dad….

This is where it gets funny:

My Father shakes Jeter’s hand and proceeds to say (while poking Derek in his side)  “In 1979 I witnessed Carl Yastrzemski hit his 3000th hit. If you get your 3000th today, that will be two players I’ve lived to witness break 3000th”…there’s an awkward pause and my brother says “no pressure”…we all erupt in laughter.

They play Lou Gherig’s speech. They talk about the Yankee organization and all of the great work they do with the ALS association. Emotional.

We’re asked to pose for a photo.  Yankee manager Joe Girardi presents Dorine with a check for $10,000, and hands my brother a home plate for the ALS Association signed by all of the Yankees.  Joe shakes our hands and takes a photo.

All of this, and the game hadn’t started yet.

We all know how the story ends.  Jeter homered for his 3,000th hit, going 5 for 5 with a tie breaking single in the eighth inning that gave the New York Yankees a 5-4 victory. Magical.

I can go on for days writing about all of the perfect little things that happened…but I really want to say this:

My brother Mark pulled off something that I don’t think I could have even conceived, and for that I am eternally grateful to him.   I’m amazed by his actions. His thoughtfulness, his patience, his character, his integrity and the honor he brought to our family.  Now my Father is inextricably linked to TWO of the all time greatest Yankees. Lou Gherig because of their shared horrible disease and now Derek Jeter.  Thank you Mark, I love you.

Saturday July 9th, 2011 was a great day for the Dessi family. I hope this gave you a little glimmer of the joy that the New York Yankees organization and the ALS Association helped us experience. We are forever grateful. 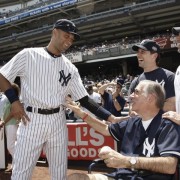 Teaching, Giving Back, and Why My Mother Pat Dessi is the Best Human Being I know 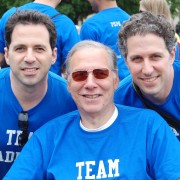 An Open Letter to My Unborn Daughter
Father’s Day