After receiving such amazing feedback regarding last weeks five part series for beginners in social media, I felt that I would continue to build on the manner in which business owners can find topics to blog about. Here’s the foundation of what you should consider.  Think about your happy consumers, and think about why they do business with you.  The example I related to Liz Nunanof Houlihan Lawrence had to do with a local business owner in Pleasantville, New York. Chris Cornell, owns and operates a framing store Cornell Gallery.  Not the most “blog rich’” environment you can think of, however I pointed out to Chris initially, (and Liz eventually) that the topic of blogging shouldn’t really have that much to do with the frames themselves. Sure, he could talk about the frames themselves, and how they further enhance the photos and paintings, however I encouraged Chris to look at Framing a little bit different in the social ecosystem. The example that I shared with Chris had to do with a letter I received from my grandfather when I was 18 years old. My grandfather, or Papa as we called him wrote the letter in response to my receiving the Coaches Award during my days as a Mahopac Football player. At the time I thought this was a “nice” gesture, and put the note in my desk drawer, not really thinking much of the content of the letter. When I uncovered the letter as a 33 year old man, it shook me to my core. I started to cry when I read it, and I immediately decided to frame the letter and put it on my night stand. I’d venture to say that this note is one of my most prized possessions.  These stories are the type of themes I encouraged Chris to blog about. While framing is at the core of the story, it really has nothing to do with what Chris should be talking about in the social media ecosystem. He should be blogging about the stories and the emotion behind the framing.  Uncovering “why” people frame certain things is where the real interest lies.

Similarly Liz Nunan and her team at Houlihan Lawrence (while it’s appropriate to speak about real estate) should really be blogging about the factors that are in play when someone makes a life changing purchase of a home.  How has the move effected the people moving? What are some of the major decision points outside of price- school district, mortgage rates, location etc.  If Liz’s team start to feature happy clients that have bought from her, think about the power of those posts.  Her team could feature people who are relocating from long distances, and discuss some of the challenges they encountered etc. Personally, if I were in the market to buy a new home, I would be much more excited to buy from someone that has met the needs of a client that looks just like me.  The benefit of peeking behind the curtain in this scenario is very very powerful.

Can  you see now how blogging on behalf of your business can really support not the product that your selling rather the culture of your business, and the REAL reason why people buy from you? 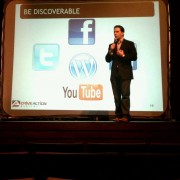 College Students: Four Easy Steps to Clean Up Your Facebook Page Before the Big Interview