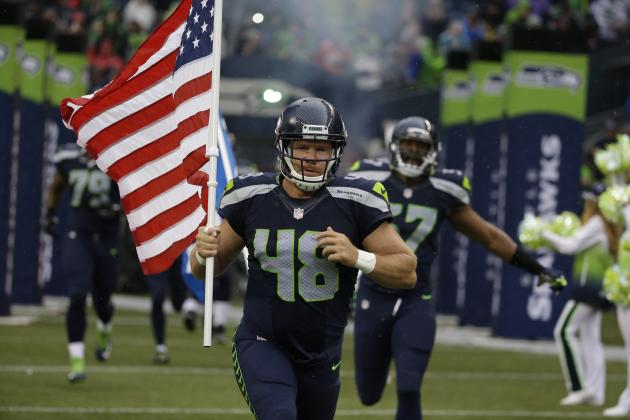 We all know people who produce results that seem otherworldly. People, who can cut through the cacophony of life, put their finger on a pulse, harness its energy, and manifest things. Big, audacious things that many people only dream about.

They bound through life with a thirsty ferocity. Nate Boyer is one of those people.

Either one of these things on its own is impressive. Together, he seems transcendent. Nate is a fraction of a percent of the elite one percent. The best of the best. Twice.

He’s also the guy who you may have spotted standing on the sidelines with Colin Kaepernick. I had a chance to speak with Nate about how he produces stunning results in his life.

1. Have a mortal fear of regret.

Unlike most elite NFL players who have been playing the sport since childhood, Nate began his football career at 28. He played at the University of Texas as a Longhorn and was drafted by the Seattle Seahawks.

When I asked him why he went out for the football team at 28, he didn’t hesitate “people need a purpose,” continuing “I didn’t want to regret NOT playing football.” Adding, “we’re just like horses we all need a job. If we have no task, we have no purpose.”

Shocked by his success, I asked him how he approached the challenges in his life. The answer he said is simple “break things down to their simplest form.” Adding that “if you can break big things down, add sacrifice, and time, you can do anything.”

Nate then began discussing how audacious goals and dreams intimidate most people. They look at elite athletes or high-ranking military people as something other than human.

He believes that’s a huge mistake. “They’re just people, that focus and commit to something.”

As our conversation continued Nate and I went deeper. We began discussing the bigger picture of life. We discussed how we’re only on God’s good earth for a short time.

Nate added some profound commentary here. Sharing that “Human beings don’t know why we’re here. For some people that can be scary, or comforting.” Adding that “life (in its simplest form), is meaningless — non of us know why we’re here so you can make it what you want.”

I asked Nate if he knew what was next for him, and how he decided what to do next. He confessed that he doesn’t create formal five or ten-year plans.

The way he decides what he wants to do next is he creates time to think, or as he put it “I daydream about the future all the time.” Sometimes that can be in the gym, or just creating quiet time.

5. Get crystal clear about what you want.

About an hour into our discussion, I acknowledged the amazing connections Nate has made in his career. It seemed that good things just happen to Nate, and then he stopped me.

He explained that his success boils down to clarity. That many people that he encounters, are flapping in the wind. Not understanding what they want to do with their lives, or how to accomplish their goals.

So I pushed and asked him how people can get to that level of clarity. He recommended to “taking any meeting with anybody.”

So if you have interest, learn as much as you can about that interest, via as many people as you can.

Good advice. But there was more to it.

Nate is working on a top-secret project that I can’t write about here. He mentioned how the project manifested and that it was something he’d been thinking about for years.

He then shared that there was one person in particular that he wanted to work with, and eventually ended up working with this “dream person.”

Curious, I asked how it all unfolded. He spoke about having clarity, but then followed up by explaining, “when I would take these meetings people began asking me how they could help me, and I didn’t have an answer.”

Adding “I realized that if I had clarity and a specific answer to that question, things would start to happen.” They did, and they are.

7. You don’t have to be smart to create a phenomenal life.

Nate is a young guy who has a lot of wisdom about life. He’s done so much and succeeded at such a high level. Where did this wisdom come from? School? Life? Maybe it was Mom and Dad?

He laughed and said, “What I do is the opposite of wisdom.” Adding “I’m not the smartest, I just realize we’re on this planet for a short time, and I want to try things that I’m interested in. It’s that simple.”

That if he was great at everything that he tried, it wouldn’t be fun. That he becomes pretty good at things that interest him, and it’s obvious to him that it’s that journey that makes him happy.

Sharing, “People have this irrational fear of failure and add too much weight to what people will think if they fail. Who cares? He added, “The reality is that nobody cares if you fail. They just don’t. So why not try it anyway?”

Finally adding “you can fail at a million things, and have an excellent life trying things that interest you.”

9. Being stubborn, and a bit naive can be a blessing.

Nate has many irons in the fire. He’s an owner, operator, founding member, and Vice-President at Mission6Zero, he volunteers his time at Merging Vets and Players, and Waterboys.

When discussing his newest top-secret project he talked about some of the success he was already having. Adding, “being a bit naive to how certain things work can be a blessing. Should I have gone to school to do this? Maybe. Can I go about it a different way, because that’s just the path that I’m going to take, you bet.”

Nate believes that reaching and reverse engineering your path can be half the fun.

Nate asked me “why would you spend your time doing something you hate?” Again, this seems so simple, so I pushed him. Well, what happens to the guy who has a mortgage and a wife, and kids and can’t quit his job to chase all the things that interest him?

We agreed that this person could at least start pursuing his or her interests on off hours. Creating time for daydreaming and deep thinking about their next career.

Nate said, “People just need to try things.” “Even if you’re always failing people will look at you, and say — man, that guy really went for it.”

If you’d like to learn more about Nate you can find him on Twitter, and at Mission6Zero.