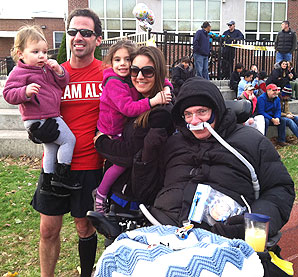 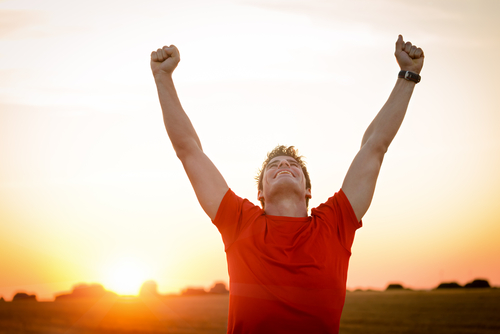 I didn’t expect it to bubble up like that, but it did. I can’t change the emotion. It just came, hard and fast. I buried my face in my Father’s neck muffling my sobs.

I was shattered, but I felt the most alive I’ve ever felt in my entire life. My body ached, and I was hungry. R-e-a-l-l-y hungry. I had just run a marathon.By myself. I meandered through Chappaqua, New York for 10 miles and completed the last 16.2 miles running in circles on the Pleasantville High School Track. I didn’t plan it that way, and frankly I don’t recommend it. I was supposed to run the NYC ING Marathon, but Hurricane Sandy had other ideas. I was hoping to run through the streets of New York with other New York City Marathoners, and cheering fans. Instead I was running in circles on a track by myself.

I had raised money for ALS research because my Father is living with the disease, and I felt obligated to fulfill my end of the deal with the friends and family who had written checks. I decided to run the marathon anyway.

By the time I completed the marathon my family, along with random bystanders were on their feet cheering me on. There may have been 25 people there, but to me it felt like a stadium full of supporters.

A few months ago I was asked by a friend what my tombstone would say.

I thought about it long and hard. I bounced ideas around, and finally said

What do you stand for?
[/av_textblock]