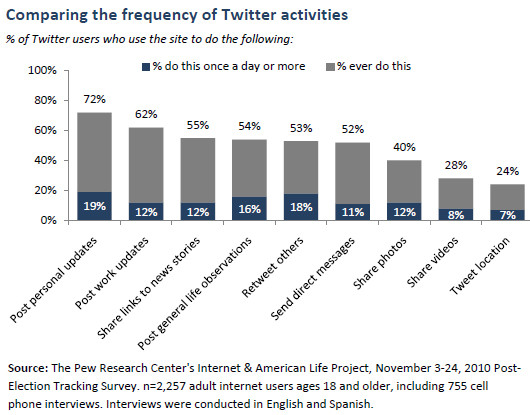 About 7 days ago Suzanne Choney of Technolog on MSNBC posted some interesting findings regarding American’s use of Twitter.  I have a tendency to focus most of my blogging energy these days on Facebook, so after reading Suzanne’s piece I thought I’d throw a little love toward my favorite micro-blogging platform.  The reality is that I use Twitter just as much, if not more than I use Facebook. I’m certainly a “power-user” of both technologies, but the stats that Choney posted were fascinating. Let’s take a look:

I love that the numbers support what I felt I always knew.  I’veposted in the past, that Twitter (in my summation) was more of a business cocktail party where there may be a few family friends in attendance, but for the most part you’re going to feel comfortable discussing things like breaking news, work updates etc.  This is exciting because it debunks the notion that all people do on Twitter is post mundane Tweets about what their eating etc.  While I’m certain this is the case for many people, we can’t ignore the huge percentage (62%) of people who use Twitter for work updates.  This further supports the power of Twitter keyword searches.

Think of the relevance of news stories (55%) of people Tweets as news breaks.   My personal recommendation for anyone that’s involved in old media TV, Radio Print…to have a Twitter account, and leverage Twitter as a tool for breaking information.  The more that Twitter becomes ingrained into our society the more you will be able to discover a wide range of breaking stories.  It’s also a phenomenal outlet for news personalities to engage with their viewers.

Let’s be realistic here: TV isn’t dead yet.  If you put a watermelon on a television channel for 24 hours a day 7 days a week, people would line up for hours to touch that watermelon.  But think of the power of a news personality who also has an active and engaging Twitter account.  People could tweet directly to them to share breaking news, or even share story topics, or ask questions in real time.

Bottom line: Twitter is becoming more and more relevant, and these statistics support that theory.