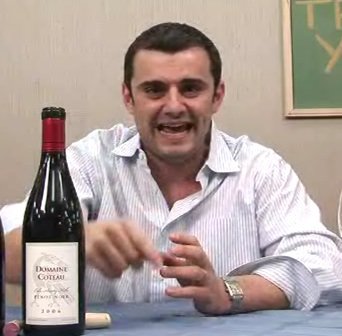 For those of you that don’t know who Gary Vaynerchuk is, I’ll offer a quick glimpse.  I assure you that I’m not doing the guy justice with my clunky writing. I’m not a writer by trade.  Currently, I’m Director of Sales for Buddy Media. I got here because of Gary.  I saw him speak at the Web 2.0 conference, and it changed my life. What I’d recommend you do after you read this post, is to take a few hours and watch Gary at work.  He’s a “you have to see him in action” type of guy.

You can learn more about Gary here:

Gary’s an immigrant from Belarus, Russia, wine store owner, self-made man, social media maverick, and pint-sized pundit filled with years of hard-earned business acumen.  He’s a fireball of energy that keeps on keepin’ on when everyone else is down for the count (this is starting to sound like an introduction to a heavyweight title fight)…which is awesome….but I digress..

1. He thinks about his legacy
Do you remember that time you tried to sound smart and use a big word, only to be corrected by someone the moment that word left your mouth? Gary Vaynerchuk seems to have bottled that very feeling into a canister and used it to power the engine that drives him into the wee hours of the night. Every night, no matter what. To make more money, to be better than the next guy, to be a better person, to crush it. This is a man on a mission that never forgot what it felt like to be picked on. To be the last one selected in gym class, to not perform well academically. Gary blows over his academic career with a tertiary “everyone knows I was an F student”…when asked about High School on ObsessedTV he mentions “I am so uncomfortable with the HS game of course because people make fun of people, that is really a tough zone for me” – if you look a little bit closer you can see a man that’s driven by perceived failures. A man that’s smart enough to know what he’s not, and even smarter to know what he is. He’s not supposed to be this successful. He’s not supposed to be a Mogul. He’s not even supposed to own a wine store…MAYBE a liquor store, but not a wine store.  This guy found what he loved, and absolutely unequivicoly destroys it, daily.  He’s not pissed off at the world because of this,  but you can see that if Gary weren’t an immigrant who’s first New York Jets Jersey was knitted by his mother because they didn’t have the money for a real Jersey, this would not be the same guy you see today. He’s motivated by the same fire that has built this country, the American dream and the idea that he can do better than his father before him.  This is a man out to define his place on this earth, to carve out a legacy.  He built his family business from $4million to $50million, and he wants more.  He wants to buy the Jets.  Gary spoke to me about how he gets that he could be the “wine guy”  (visa ve the Food Network or something like it), but being the “wine guy” AND the “owner of the Jets” AND the “social Media guy”…now that’s Legacy…Gary thinks about his legacy.

5.  He loves (his wife, his Dad, his brother, his daughter, his sister, his mother, and his friends)- when I first learned about Gary Vaynerchuk at the Web 2.0 conference last year he blew my mind. Seriously. I forwarded his speech to friends and family telling everyone that would listen that this guy is the real deal. He turned my perceptions of success, the manner in which business can be conducted, and the manner in which I should be, or could be conducting myself on end. Twenty minutes after his talk I was speaking to head hunters, and my life changed forever.  This is a man that wears his heart on his sleeve.  His insane popularity leads me to this conclusion:

America is gonna love this guy: as a Producer, Wine Guy, Social Media Pundit, Business Stud, Book Writer, Public Speaker, Host of Anything, Owner of the Jets,…Professional Thumbwresler…whatever…America is gonna be pickin’ up what Gary Vaynerchuk is putting down, and he WILL be a household name in under 5 years.